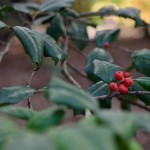 Shirley Duffy is a recent transplant to Delaware who is proud of her new state. And as an avid gardener, she knew just the way to show her state pride — by planting an American holly in her Newark yard.

The American holly (Ilex opaca) has been the state tree of Delaware since 1939. Back then, the holly was an important cash crop to the state, says Carrie Murphy, a horticulture agent with University of Delaware Cooperative Extension.

Holly grew in abundance in the wild, particularly in Sussex County. Savvy entrepreneurs, such as Milton fertilizer salesman Charles C. Jones Sr. recognized that there was money to be made from this broadleaf evergreen. He began shipping wreaths and other holly products throughout the U.S. and abroad. By the 1930s, Delaware had become the leading supplier of holly in the nation. The town of Milton produced more holly wreaths and decorations than any other town in the world.

With the advent of artificial decorations, as well as wage law requirements for piecework businesses, the state’s commercial holly industry declined and ceased entirely by the 1960s. These days, the only holly harvesting in Delaware is in backyards like Duffy’s. A UD Master Gardener, Duffy likes to take holly cuttings throughout the winter, not just at Christmas time.

“I use holly for both indoor and outdoor arrangements,” says Duffy. For an easy but eye-catching decoration she arranges cut holly boughs down the length of her dining room table.

Ed Stevenson, a Master Gardener who lives in North Wilmington, also turns to the hollies in his yard for seasonal decorations. However, he uses holly judiciously because it does have a few downsides.

“We cut holly branches and use them for a Christmas table centerpiece,” says Stevenson. “However, once holly is cut, the leaves start to shrivel and the berries slowly darken. The branches should either be cut close to Christmas, or, if they are cut earlier and show signs of aging, they can be replaced with newly-cut branches.”

“Because we expect our Christmas door wreath to last about a month – early December through mid-January – we don’t use holly in it. Also, keep in mind that the sharp leaf spines of the holly can scratch wood finishes so don’t put it directly on wood,” he says.